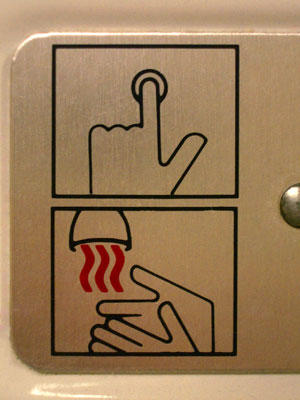 UPDATE: I get so many Google visitors to this post I thought I'd add a little information. Quite a few years ago, when hand dryers stopped having English instructions and these little pictures made their debut, I was out on a photo shoot with friend and art director Dick Allowatt. We were washing our hands in a McDonald's somewhere and I said to him "look at this... to me this looks like it says push button, receive bacon." Well... we laughed and laughed all day about that. I thought it up all on my own but I have no idea really what year that was. When I put this post on my blog, a friend of mine said "did you get that idea from Charlie Cooper?" I said that I thought it up all on my own, but she said that she heard that Charlie said that. Well... I did a quick Google search and found that the phrase was all over the place. Apparently there was a punk band named Push Button Receive Bacon. Somebody had a CafePress site selling stuff with the phrase on it! Was I the first to say that? Did it spread virally from me? I have no idea. Perhaps I was the first but I doubt that it spread just from me... perhaps many people said it. No one will ever know, but it's still funny.
Click here for my main page.

Now this is hilarious!

Wait, I know this one! Ground Beef!

Oh, this wasn't one of those mystery photos? Never mind.

Wow, I want one of those bacon machines at my house :-)

I always thought it was bacon... but now that you mention it Dave... it does look kinda like ground beef coming out of the grinder.

I have one of those installed at my house. Sure hits the spot when I get a hankerin' for raw meat!

you know,i think it may be FSM in
marinara trying to trick you

I think they have this in the Capitol Building, only it doesn't just distribute bacon, all types of pork are available.

Ah, FSM. It must be a baptismal font. Therefore, everyone who has ever used one of these machines has been accepted by His Noodliness. Excellent.

Clearly, one of those bacon bandmembers overheard you and highjacked the phrase for their own use.....Did you check the stalls first?

Yup. Methinks royalties may be due.

Andrew Stella said...
This comment has been removed by the author.
5:50 PM

when i am cooking i usually add bacon because the taste is really delicious. Actually the bacon for the breakfast is really good i enjoyed a lot. Although the ingredients of the meals be simply if you chose the right ones,the taste will be wonderful.

Thank you for sharing it with us.
parking at luton airport

Rick Lee
Charleston, WV, United States
A commercial photographer in a small market. I love my work and I love the people I work with. How cool is that?